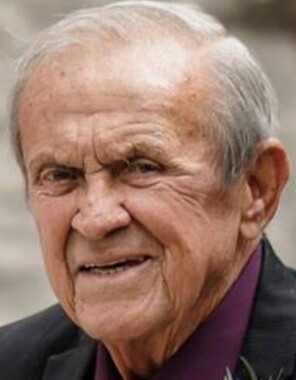 Back to Richard C.'s story

Richard C. Stybak, 85, of Niagara Falls, NY, passed away on February 10, 2020 at Niagara Falls Memorial Medical Center. Born in Niagara Falls, NY, he was the son of the late Casimer and Jane (Pinkowski) Stybak.
Richard was raised in Niagara Falls, attended Bishop Duffy High School and graduated from Niagara Falls High School. He proudly served his country in the United States Navy from 1956 until his honorable discharge in 1960. Stationed in Norfolk, VA, he also spent time in Greece and Italy.
On October 1, 1960, he married Judith L. (Swiezy) Stybak at St. John DeLaSalle Church in Niagara Falls. Mrs. Stybak predeceased him on May 31, 2016, after 56 years of marriage.
Richard was employed at Kimberly-Clark, Airco-Spear and Carborundum in his younger years. Most recently, he worked as a welder for the New York Power Authority, where he retired from after over 20 years of employment. In addition, he taught welding at Niagara-Orleans BOCES.
Richard was an avid fast-pitch softball player in his younger years, where he was a catcher for Simon Pure and other teams in the Niagara Falls Industrial League. He was inducted into the Niagara Falls Old-Timers Sports Hall of Fame. He enjoyed playing golf, playing handball at the YMCA, puttering around the house and fixing things, cooking pizza, and growing the perfect tomato. Above all, he cherished the time spent with his family, especially his grandchildren.
Mr. Stybak is survived by his children, Nancy Filosofos and Richard A. (Theodora) Stybak; his grandchildren, Rachel (Tyler) Diez, Juliet Filosofos, James Filosofos, Thalia Stybak and Anthony Stybak; his sister, Barbara (late Michael) McNerney; as well as several nieces, nephews and cousins.
Visitation will be held on Friday, February 14 from 3-8 PM at M.J. COLUCCI & SON NIAGARA FUNERAL CHAPEL, 2730 Military Road, Niagara Falls, NY 14304, where funeral services will begin on Saturday at 9:45 AM followed by Richard's Mass of Christian Burial at 10:30 AM at Holy Family Parish at Mt. Carmel Church, 27th and Independence Avenue, Niagara Falls, NY 14301. Interment in Holy Trinity Cemetery, Lewiston, NY at the convenience of the family.
If desired, memorial offerings may be made to Niagara Hospice, 4675 Sunset Dr., Lockport, NY 14094. Visit mjcoluccifuneralchapel.com for online condolences.
Published on February 11, 2020
To send flowers to the family of Richard C. Stybak, please visit Tribute Store.

A place to share condolences and memories.
The guestbook expires on May 11, 2020.

Andrea (Gibbs) Fincke
Cousin Richard was always the guy with a ready smile while cooking the corn on the cob or the clam chowder at the Pinkowski family reunions. Cherished memories of a great guy who will be missed by many.
Denise (Cortese) Barnett
May God grant Richard eternal peace, and comfort the hearts of all his family and friends. He and Judy were valued neighbors for many years.
Robert Luskin
My condolences for the passing of Dick. As a child I remember watching him play for the Simon Pures. Years later Dick was my welding instructor in my apprenticeship. I loved to hear his baseball stories especially about his World Series trips. RIP Dick
View all