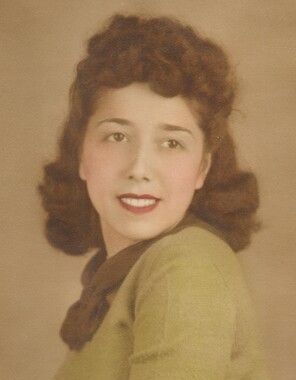 Back to Mary Jane's story

Mary Jane Ross, 95, of Niagara Falls, NY returned to her Heavenly Father on Tuesday, February 18, 2020. Born in Clymer, Pennsylvania, she was the daughter of the late Pietro and Mary (Linza) Formica.
Mary Jane moved to Niagara Falls as a child with her family and graduated from Niagara Falls High School. She worked at Carborundum, and later at the Niagara Falls Public Safety Building from 1958 to 1973 in the records room for the Niagara Falls Police Department. Most recently, Mary Jane was employed with the City Court of Niagara Falls from 1973 until her retirement in 1990.
Mary Jane was a member of the Buffalo Niagara Healing Rooms Ministry, the former Sacred Heart prayer group, The John Duke Center, The Golden Agers at Spallino Towers, and The Socialites.
Mary Jane enjoyed traveling internationally in her younger years with a close group of friends. She loved music, especially large band orchestras, and singing with the former Our Lady of the Rosary Choir. Additionally, she enjoyed refinishing furniture, beadwork, bowling, lawn bowling, swimming and baking. Above all, Mary Jane will be remembered for her love for life and the joy she shared when she was around her dear family.
Mary Jane is survived by her daughter, Deborah (late William) Bolents; her grandchildren, Ashleigh (Michael) Schwallie and Jonathan Bolents; great-grandchildren, Zoie Isabella and Aria Grace Schwallie; her special niece, Carmen Kennedy; nephew, Gary Formica; great-niece and great-nephew, Rachelle (David) Grossman and Jack (Jennifer) Kennedy; as well as several cousins. She was predeceased by her brother, Joseph (late Cecelia) Formica.
Visitation will begin Friday, February 21st from 4-8 PM at M.J. COLUCCI & SON NIAGARA FUNERAL CHAPEL, 2730 Military Road, Niagara Falls, NY. A Celebration of Life Service will be held at 10:30 on Saturday, February 22nd at In His Presence Church, 704 91st Street, Niagara Falls, NY 14304. Interment in Gate of Heaven Cemetery, Lewiston, NY. Visit mjcoluccifuneralchapel.com for online condolences.
Published on February 19, 2020
To plant a tree in memory of Mary Jane Ross, please visit Tribute Store.

Plant a tree in memory
of Mary Jane

A place to share condolences and memories.
The guestbook expires on May 19, 2020.

Ron & Sally Cialone
Debbie,
We wish you and your family our deepest sympathy for the loss of your Mom. She was a very special person and will be sadly missed by all.
Sarah vakkur

Marlene Warner
My deepest sympathy to her loved ones.
When I was growing up, She was the sweetest person on all of 21st Street ❤️
Gail Arbeiter
What a lovely lady! I always enjoyed ministering with Mary Jane at the Niagara Healing Room. She was a joy to be with.
Mary & Dale DeBacco

We are so sad to hear or Mary Jane's passing, but happy to hear of her peaceful entrance into her eternal life, with her Lord and Savior Jesus Christ. Our condolences to her lovely family.
Love, Mary & Dale

Michael Cirrito
Deepest condolences to cousin Debbie Bolents and family on the loss of a dear mother, grandmother, and Aunt. She was such a special person with a delightful smile, and a loving disposition and always happy to see family and friends alike. She will be missed!! Cousin Michael,Helen, Andrea, Michael Cirrito (Michigan)
Raiza Mazas

Shelly Haferkamp
My deepest condolences go out to the entire family!! Mary Jane was always such a blessing to be around. An Angel has received her wings ❤️
Pat and Patty Gibbons

Our condolences to Mary Jane's family. She was our friend and neighbor on 21st Street.