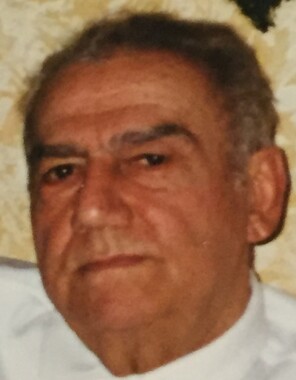 Back to Dominic F. "Buddy"'s story

Dominic F. "Buddy" Luna, 87 of Niagara Falls, NY, passed away surrounded by his family after a brief illness on February 7, 2020 at Niagara Falls Memorial Medical Center. Born October 11, 1932 in Niagara Falls, NY, he was the son of the late Joseph F. and Mary (Colosi) Luna.
Buddy was a lifelong resident of Niagara Falls, and attended Trott Vocational and Bishop Duffy High School. On June 12, 1954, he married Diana "Dee" (Massi) Luna at St. Patrick's Roman Catholic Church in Niagara Falls, Ontario. Mrs. Luna predeceased him on May 1, 2009. Buddy was employed for his entire working life as a millwright for the Carpenter's Local Union #276.
Buddy played semi-professional football in his younger years for North End in Niagara Falls. He was an avid golfer, and loved watching his family participate in sports. Buddy had a great sense of humor and was very generous. Buddy was an avid hunter and fisherman, and also loved to feed the horses at the track.
Buddy will be sadly missed. He is survived by his children Susan (Shawn) DeLong, Dominic J. (Cyndi) Luna, Donna (late Kevin) Klinger, JoAnn (George) Mills, and Joseph P. (Natasha Oliver) Luna; his grandchildren, Kevin (Christine) Klinger, Robert (Cecelia) Klinger, Kelli Luna (Matt Gomesky), Michael Luna, Vienna (Matt Bowen) Mills, Casey DeLong, Dee Luna, and Mathias and Josiah Oliver; his great-grandchildren, Trevor "Trigger", Joseph "JoJo", Brody and Brianna, as well as several nieces, nephews and cousins. In addition to his wife of 55 years, Buddy was predeceased by his infant son, Joseph D. Luna, and his brother, Joseph F. "Junior" Luna, Jr.
There will be no prior visitation. Buddy's Mass of Christian Burial will be held on Wednesday, February 12 at 10 AM at Holy Family Parish at St. Joseph Church, 1413 Pine Avenue, Niagara Falls, NY 14301. Interment in St. Joseph Cemetery. Flowers gratefully declined. Arrangements by M.J. COLUCCI & SON NIAGARA FUNERAL CHAPEL, 2730 Military Road, Niagara Falls, NY 14304. Visit mjcoluccifuneralchapel.com for online condolences.
Published on February 8, 2020
To send flowers to the family of Dominic F. "Buddy" Luna, please visit Tribute Store.

A place to share condolences and memories.
The guestbook expires on May 08, 2020.

frank and sue white
dom and Cyndi so sorry for your loss
Joe Rodriguez
Sorry to hear about bud, I’d like to say what I know about Bud Luna , I worked , hunted and drank with that man ,he was a gentleman’s ,gentleman that had a class of his own ,I know he’s enjoying Heaven.
Tara Toenniessen
Dom & Family,

Sorry to hear of the passing of your father. Thinking of you and sending prayers.
Tribute Store

I'm so very sorry for the loss of your Dad. I've been keeping him and all of you in my prayers. God bless you all. Sincerely, Margaret

We are so sorry for your loss. May all the great memories you have keep you strong and help heal some of the grief. He will be missed by so many. All of our love

Lou and Claudia
Joe , Natasha , Donna and the Luna Family.
We are so sry for your loss. Your memories will always be alive in your hearts.
God Bless
The Hawks. Henry and Toni
Sorry for your loss. May he rest in peace
JoAnn & Gary Eichler
So sorry for your loss of father and grandfather.. Our prayers and thoughts are with you all.
View all