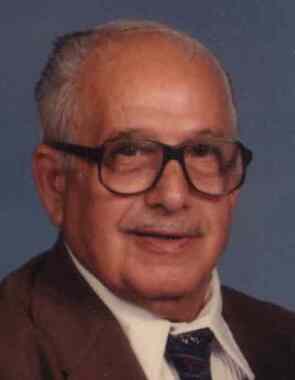 Back to Dominic's story

Mr. Dominic Joseph "Mimi" Etopio, 99, of Niagara Falls, NY, passed away peacefully into the loving arms of Jesus on February 11, 2020.
Born on September 8, 1920 in Niagara Falls, NY, he was the son of the late Angelo and Josephine (Tedesco) Etopio. On November 20, 1943, Dominic married Marie Barbera. Mrs. Etopio predeceased him on November 26, 2004.
Mr. Etopio was a lifelong resident of Niagara Falls, NY, attended local schools and graduated from Niagara Falls High School in 1938. Corporal Dominic Etopio proudly served in the United States Marine Corps, stationed in the Pacific area, as a machine gun crewman, during World War II, from February 3, 1943 until his honorable discharge on December 19, 1945. He retired from Chisholm-Ryder where he was employed as a machinist. Mr. Etopio was a communicant of Holy Family of Jesus, Mary and Joseph Parish, where he worshiped at the St. Joseph site, often the Saturday 4:00 PM Mass. Dominic was also a member of the VFW Cadille Post and a New York Yankees fan, and enjoyed bowling.
Mr. Etopio is survived by children, Donald (Lesley) Etopio and Barbara Cline and the late Francine (late Daniel) DiNunzio; grandchildren, Daniel (Nicole) DiNunzio, Greg Etopio and Jennifer (James) Clark; great-grandchildren, Sydney, Chelsey, Grace, Ronin, Thomas, Jocelyn, Tori (Brendon), Jacob and Mackenzi; siblings, Thomas (late Gloria) Etopio, Sr. and Betty (late Anthony) Mariano; sister-in-law, Angeline (late Russell) Barbera and several nieces, nephews and cousins. In addition to his parents, wife and daughter, he was predeceased by siblings, Christopher (late Teresa) Etiopio, Janet (late Carl) Gemmati and Joseph (surviving, Aurora) Etopio.
Visitation will be on Sunday from 2-6 PM in the Chapel of OTTO REDANZ FUNERAL HOME, 2215 Military Road, Niagara Falls, NY. Dominic's Mass of Christian Burial will be celebrated on Monday, February 17th at 10:00 AM, at Holy Family Parish, St. Joseph Church, 1413 Pine Avenue, Niagara Falls, NY, with Rev. Stewart Lindsay, O.S.F.S., serving as celebrant. EVERYONE ASSEMBLE AT THE CHURCH. Prayers of committal and entombment, concluding with Marine Corps Military Honors, will follow in St. Joseph Cemetery, Niagara Falls, NY.
In lieu of flowers, memorial offerings may be made to a charity of one's choice. Arrangements are under the direction of Michael R. Goodlander.
To share condolences and view his tribute video, visit GOODLANDERCARES.com
Published on February 14, 2020
To send flowers to the family of Dominic Joseph Etopio, please visit Tribute Store.

Send flowers
in memory of Dominic

A place to share condolences and memories.
The guestbook expires on May 14, 2020.

Judy and Dave Smith
Uncle Dom was a very special person and will be missed.
Louis barbera
very sorry for your loss don and barbara.uncle dom was a special man,enjoyed every moment i spent with him and aunt mary growing up.he will be missed.
View all