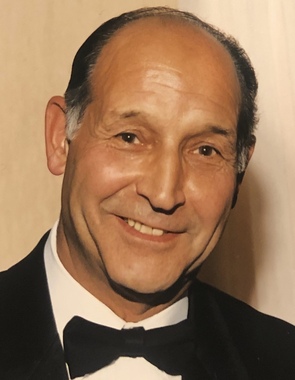 Back to Claude's story

Claude Santarosa, 85, of Lewiston, NY, passed away peacefully at his home on Monday, February 10, 2020, surrounded by his loving family. Born in Sulmona, Abruzzi, Italy, he was the son of the late Salvatore and Lucia (Celeste) Santarosa.
Claude's father and older brother, Julio, came to the United States prior to World War II and made their home in Niagara Falls, NY. Following the war, Claude immigrated to the United States along with his mother, sister, Liana, and his older brother, Chester. They arrived in New York City Harbor, Labor Day weekend of 1946, and were reunited with their family the following day.
Claude attended local schools and was a sheet-metal worker by trade. Over his lifetime he could be labeled as a business owner, tradesman, coach, teacher, union delegate and eventually retiring from Tam Ceramics. He took great pride in building the homes where he raised his family.
He was a member of several local clubs including St. Peters Holy Name Society and Cristoforo Columbo Society, and also had a reputation for helping wherever he could. Claude was considered an excellent cook and enjoyed having his grandchildren help him make gnocchi's and Italian sausages. He loved to travel with his wife and visited a number of destinations within the United States and internationally. Some of his fondest memories were spending time in Florida with his family and hosting a tour through Italy on his 50th wedding anniversary, including a stop in his hometown of Sulmona.
He also enjoyed playing golf, as well as downhill skiing with his family and sometimes just with his sons. He and his wife enjoyed a long, happy retirement. Throughout his life he instilled family first and lead by example.
Claude was the husband of 59 years to his sweetheart, Eleanor (Dalla Torre) Santarosa, where together they raised their three children. Survivors also include his children, Claudia (Gary) Casamento of Wheatfield, NY, Dr. Richard (Dr. Donna) Santarosa of Greenwich, CT, and David Santarosa of Youngstown, NY; seven grandchildren, Sean, Alicia, Amanda, Samantha, Alayna, Julia and Richard. He was predeceased by his sister, Liana; and brothers, Julio (late Mary) and Chester (late Rose).
Visitation will be on Saturday, February 15th from 9-11:30 AM at M.J. COLUCCI & SON NIAGARA FUNERAL CHAPEL, 2730 Military Road, Niagara Falls, NY, where funeral services will begin at 11:30 AM, followed by Mr. Santarosa's Mass of Christian Burial at 12:30 PM at St. Peter's Roman Catholic Church, 620 Center Street Lewiston, NY. Interment will follow in Gate of Heaven Cemetery.
In lieu of flowers, memorial offerings may be made to Niagara Hospice, 4675 Sunset Drive, Lockport, NY 14094. Visit mjcoluccifuneralchapel.com for online condolences.
Published on February 13, 2020
To send flowers to the family of Claude Santarosa, please visit Tribute Store.

Send flowers
in memory of Claude

A place to share condolences and memories.
The guestbook expires on May 13, 2020.

Carmen Angelosante
I remember Claude as a nice caring person and I enjoyed seeing he and Eleanor dance at our Niagara Falls High School reunions. He had such a warm and welcoming smile.
Michael (Schmahl) Delia
I offer my most sincere condolences to the Santarosa family. I grew up with Anthony and Susan (Bishara), having atteneded NFHS and the University of Rochester with them. I did not know Claude well, but do fondly remember him as my landlord at 600 Pine Ave., where I had my law office for a few years in the late '90's. He was a kind and helpful man, always in fine spirits. Be strong and carry on. Your family's bountiful love will guide you through this most difficlut time.
Gene & Berni Colucci
Eleanor & Family:
Gene and I were very sad to hear of Claude’s passing. He was a good friend and neighbor to us for over 30 years. We will miss him. RIP✝️
View all