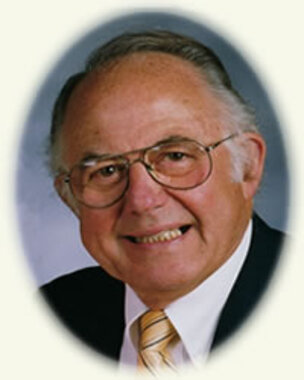 Back to Charles's story

Charles Earl Porter, of Niagara Falls, NY, passed away on Friday, January 17, 2020, under the care of his family. He was born in Niagara Falls, NY, on December 30, 1927, the son of the late Charles O. and Beulah (Jackson) Porter.
Mr. Porter served with the US Army in Korea. After returning from the service, he was employed as an electrician with several businesses and then helped with the construction of the Robert Moses Power Project. He was a general supervisor at the GM Tonawanda Engine Plant for 26 years, before retiring in 1986.
Mr. Porter was actively involved with the Deveaux Beautification, Grand Niagara Hockey and the Mang Sharks Hockey Team. He had an indomitable spirit with an inspiring and infectious love of life and learning, as evidenced by his varied and expansive interests. Having grown up in Canada, he loved hockey, playing and listening to music, golfing, fishing, amateur aviation, sailing, scotch, beekeeping, and even took up scuba diving post-retirement. But his love of creating memories with family and friends was perhaps most emblematic of who he was. For decades, he and his wife, Beverly, generously hosted annual picnics and parties on most major holidays, with family, friends, neighbors, and extended family attending these memorable events year after year.
He was predeceased by the love of his life, his wife of 67 years, Beverly A. (Hanson) Porter. He is survived by his four children, Carolyn (late George) Rutledge, Pamela (Joseph) Suszczynski, Charles (Susan) Porter, Jr., Beverly J. (Brian) Federspiel; six grandchildren, Jeff Suszczynski, Chris (Sandy) Rutledge, Jennifer (Kevin) Caprio, Jared Porter, Cheryl Suszczynski, Douglas Porter; ten great-grandchildren, Lauren, Sarah and Jack Rutledge, Savannah and Stephanie Porter, Charlie Porter, Declan and Melina Caprio, Ben and Stevie Porter; sisters, Jean and Elizabeth Porter, also many nieces and nephews. He was the grandfather of the late Steven C. Porter; and brother of the late Franklin Porter, Marjorie Porter, Elaine Highhouse and Lillian Porter.
His family will be present on Saturday from 3-5:00 PM at the RHONEY FUNERAL HOME, 901 Cayuga Street, Lewisotn, NY, followed by Military Honors at 5:00 PM. Inurnment in Riverdale Cemetery, Lewiston, NY.
Flowers are gratefully declined. Memorials may be made in his name to the non-profit radio station WAYO 104.3FM, 1237 East Main Street, Rochester, NY 14609. Online donations may also be made at https://donate.wayofm.org/ (please enter his name in the Additional Comments field).
Visit rhoneyfuneralhome.com for guest register.
Published on January 21, 2020
To plant a tree in memory of Charles Earl Porter, please visit Tribute Store.

Plant a tree in memory
of Charles

A place to share condolences and memories.
The guestbook expires on April 20, 2020.

Bill, Jr. Hilts
So sorry to hear about the passing of Charlie. Thoughts and prayers go out to the family. I have many fond memories of him from the days with the Niagara Falls Mangs Sharks hockey experience, which he was an important part of. My condolences...
Lynne Ford Mauro
So sorry for your loss. I remember your father as a very kind and welcoming person. Offering prayers for you and your loved ones.
Josh Moccio
My heart goes out to Charlie, Sue, Jared and DJ and all of Mr. Porters family. I have so many fond memories growing up around Mr. Porter and having many conversations about being an Electrician and how it all works. He was truly a man's man and a true gentleman. I will miss him.
John Rieker
To the entire Porter Family,
Very sad and sorry to hear of your Dad’s
passing. Growing up next door he introduced me to hockey taking me to creeks in the area teaching me to skate and learn the game. This was very instrumental in my becoming a player, referee, coach and director for over 30 years. I’ll never forget.
My sincerest condolences to all.
John
View all